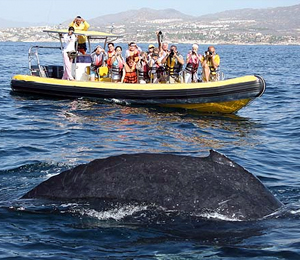 During every winter, species of the Cetacean Order of mammals annually migrate to the temperate waters of Bahia de Banderas (Banderas Bay). Cetaceans are identified as warm blooded aquatic mammals that breathe air and nurse young. There are two sub-Orders of Cetacea: Mysteceti (Baleen Whales) and Odontoceti (toothed whales) which includes varieties of porpoises and dolphins. Whale watchers have the opportunity to spot species from both of these sub-Orders during the winters in Banderas Bay:

The most overtly visible whale in the waters off Puerto Vallarta, an estimated two thousand Humpback Whales visit Banderas Bay annually. Humpbacks (Megaptera novaeangliae) are members of the Balaenopteridae Family in the sub-Order of Mysteceti. Humpbacks, like Gray Whales, migrate south along shores of North America from the Bering Sea to the warm waters off the Mexico coast. Both species travel south to breed, give birth and nurse. Humpbacks measure up to fifty feet in length and weigh up to forty tons. Humpbacks are Rorquals like Fin Whales, Blue Whales, Sei Whales, and Bryde’s Whales.

Humpbacks can be identified because of their black dorsal pigmentation with mottled black and white underbellies. Humpbacks usually eat at least a ton of krill and small fish every day. Humpback Whales are one of the best cetaceans to view while Whale Watching, since they often are seen leaping out of the water and tail slapping.

Another common whale that can be sighted along the Pacific coast of Mexico during the winter is the Gray Whale (Eschrichtius robustus). The Gray Whale, the lone member of the Family Eschrichtiidae of the sub-Order Mysteceti, can measure a remarkable fifty feet in length and forty tons in weight. The most distinctive practice of the Gray Whale is the species eating habits; they are the only known whales to feed on the sea bottom. These bottom-feeders filter tiny crustaceans from the silt scooped from the ocean floor. These streamlined gray-colored cetaceans are often seen near the coast because they prefer to give birth and nurse in sheltered lagoons.

The biggest animal on the planet, the Blue Whale (Balaenoptera musculus), were very close to being wiped off the face of the Earth due to whale-hunting. These massive Rorquals can grow to an astounding length of one hundred feet and a weight of a hundred and fifty tons.

Fin Whales, named for their signature rear dorsal fin, are only surpassed by the Blue Whale in size – a full grown adult can reach lengths of ninety feet. The Fin’s massive size, v-shaped flat head, and chevron back markings make this sleek Rorqual easy to identify.

The characteristic squared-off cranium of Sperm Whale (Physeter macrocephalus) has been depicted numerous times in art, literature, and film, including Herman Melville’s novel, Moby Dick. Found in all of the world’s oceans, Sperm Whales dive deep to feed on squid. These deepwater hunting patterns keep the Sperm Whale away from the coast. Females and their young tend to remain in tropical and sub-tropical and waters.

The Orca (Orcinus orca), or Killer Whale, are known for their pack-like predatory nature. Rather than following regular migration patterns, like the other cetaceans on this list, the Orca remain in an area until the food supply is exhausted and move on to hunt prey in more abundant waters. With their recognizable black and white markings and high dorsals, these toothy predators are easily identified. The males can grow to thirty feet in length and nine tons in weight. These clever predators don’t only feed on fish and squid, but also hunt Harbor Seals, Sea Lions, Narwhals, Porpoises, Elephant Seals, Belugas, and even adolescent Gray Whales. 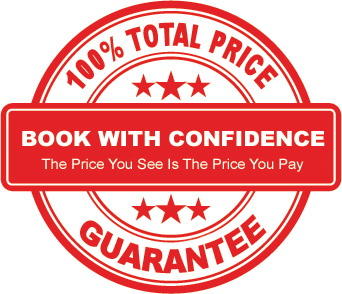